This is not a cult

With all the awful things that already happened this year in Iran, Ukraine and all over the world, columnist Johannes writes about some experiences this year that gave him hope in humanity.

Earlier last week, I watched a TikTok of someone realizing that the end of the year is coming closer already even though he had less than five memories of what happened this year. In the past I had years where I would have felt the same. But this year I don’t. This year I remember countless of genuine moments and interactions, and it all started with a skiing trip.

Seven years ago, in 2015, a group of four guys decided to do 30 things in 30 days that pushed them out of their comfort zone. What started as a small film project turned into a flourishing YouTube channel, dedicated to saying yes to opportunities, seeking discomfort, love over hate and turning strangers into friends. With the growth of that channel, a community started to form. That community eventually developed its own life. Today they are known as the Yes Fam.

In autumn of 2021, covid cases were reaching new heights, an invitation was sent into the small and not that active WhatsApp group of the Leipzig Yes Fam. An invitation to a skiing trip, organized by three members from the German Yes Fam, to bring together strangers in early March of 2022. Now that sounds sketchy for many reasons, I agree. But the pandemic was going strong for almost two years, my need for social interaction was desperately high and I had met the person who sent the link on a canoeing meet up in Leipzig before, so I joined the group. What started as a trip for 25 people, turned into 56 people from all over the world meeting for the first time in Switzerland, to ski, cook and party together for a whole week. 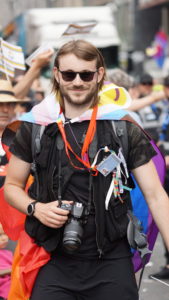 Living in a world that consisted of the daily covid stats, sexism on Instagram, hate on Twitter and fake news or conspiracy myths on YouTube, as well as on TV, living together with over 50 likeminded people led to a feeling of comfort and hope. A hope in why we live and for what we are living. It was the first time in two years I didn’t feel the stress and anxiety caused by the circumstances of the pandemic. And I wasn’t the only one feeling this way. Therefore, during this trip new friendships formed, and a lot happened in the following months.

Of course, I still study full time, so I didn’t have the chance to join all of it, but there is another one I want to tell you about. In the end of July, the Leipzig Yes Fam met up with people from alle over Germany to play real life Scotland yard, using Leipzig’s public transport systems and the beloved nine-euro ticket (RIP). Afterwards we came together for an evening of card and board games. Around midnight we started playing a game that consists of personal questions that everyone who feels comfortable sharing answers to the group. The depth of these questions heavily varies. We talked about what kind of pasta we identify with or what the best compliment was we ever got. People also shared their traumas, experiences with anxiety and depression, feelings of hopelessness and attempted suicide. They shared those thoughts and emotions, knowing they wouldn’t be judged. I had never seen a whole group of people being so accepting, supportive and self-aware before.

Every time I talk to someone who never interacted with this community, they say it sounds like a cult. So, what distinguishes the Yes Fam from a cult or religion? Firstly, it doesn’t matter what you believe in. Whether your Muslim, Christian, agnostic or believe all of this a simulation, it doesn’t matter. It doesn’t matter where you come from, how old you are, what you look like or what gender or sexuality you identify with. It is a safe space to be yourself. Secondly, you can be involved as much as you want. Join a small online game meet up on Discord, organize an international trip, leave as soon as your social battery is drained. The only things we have in common are our shared values. Empathy, compassion, respect. Our time on this planet is limited. Let’s enjoy some adventures, leave our comfort zones, and meet great people together. This is not a cult, this is a community.

We as humanity need to find our sense of community. With the chances of social media, it is easier than ever to connect. Still, so many feel alone and disconnected. If we can find that sense, if we can genuinely connect, I am convinced it would reduce loneliness and help with a lot of the problems you as an individual and we as humanity currently face. This group and similar communities are countermovements to the hate and toxicity that continuously spreads on old and new media as well as in political and religious debates. Also, the more people from all over the world you meet, the more open you become. The way this community treats itself and everyone it encounters should be the minimum requirement of humanity. Of course, this community is not perfect. We are all still humans who make mistakes and dumb decisions. But we share the good intentions that our world so desperately needs. This community gives me hope and showed me that there are still good humans out there.