A British Fish Out of Water

In travelling across the continent on an Erasmus year abroad, columnist Camilla discovers a particular hatred of German Wi-Fi, love of Milka, and perhaps a new identity.

Move to a new country, I said, it’ll be fun, I said… are words I muttered when things weren’t quite going to plan as I moved across the continent from Manchester to Leipzig. Direct flights were something of a unicorn, so a plane to Frankfurt followed by a train to Leipzig was our plan of action. Now, it’s been two months since I first touched down in Leipzig and enrolled in BA British Studies at Universität Leipzig, as an Erasmus student for my fourth and final University year. After swapping it for BA English at Manchester Metropolitan University, I have gathered some thoughts on what the initial Erasmus experience is really like, which I would love to share with you. 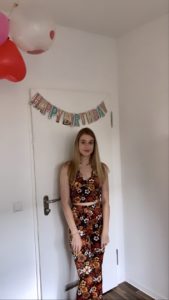 There are many aspects of moving abroad to Germany, which have been especially amusing. It’s certainly become part of your everyday life, but I still find the Ampelmann quite lovely – that is, until I’m late for my 9 am lecture and have missed my tram, as usual, therefore, the time for it to turn green feels like a million years. Public transport in Leipzig is impeccable in comparison to home, although I once got robbed on a bus at 4 am in Manchester, so perhaps there is some bias. A particular hamartia of mine, as you may have guessed, is leaving everything until the last minute. I delayed my first proper food shop until Sunday morning and set off to my nearest Aldi to do it. In Germany, all shops are closed on this day, which wasn’t ideal. It wasn’t all bad though, as the Greek takeaway next door had a great falafel wrap, which has become a favourite of mine.

While in Germany, trips to the supermarket have almost become exciting. Pechkeks in Rewe was an entertaining find, as were the tiny painted pumpkins. I’ve also made it a personal mission to try every type of Ritter Sport and Milka while I’m here. So far, Ritter Sport Marzipan and Milka Happy Cow are winners. If you’re ever in Aldi the ‘Choco und Keks’ in black & white is a steal. Also, the birthday cake situation is madness to me. At home, we just get a cake from a supermarket. However, picking up a frozen black forest gateau felt like a particularly German way to celebrate my 22nd. Accompanied by a trip to Leipzig Zoo, where we saw a hungry koala avidly eating eucalyptus and a visit to the Botanical Gardens, where I saw the biggest butterfly ever, rounded off the perfect ‘birth week’.

As for my student hall, it’s really lovely and so much more spacious than my previous flat at home. It’s the first time I’ve ever had a wardrobe big enough for all of my clothes. I’m certainly no computer whizz and setting up the Wi-Fi in my student flat is perhaps one of the hardest, and most frustrating things I’ve ever had to do. In England we automatically have wireless internet, however, in Germany a network cable is needed. In my first week, I became Conrad’s best customer and the owner of several electrical items, including a non-essential disco light. At home, we’re also given curtains but in Germany that isn’t the case. This issue was interesting to resolve. Now, I’ve got some thin ones from Woolworth, however, a satin sleep mask is my new best friend. Kettles and microwaves are also not provided, so I’m very thankful for my flatmate, who kindly let me borrow hers. Having no oven either has proved challenging, but it’s been good to concoct new recipes and an ample excuse to eat out with friends. My top recommendations are Via Bar, Stella, and Safran. Talking to the waiter at the latter about Manchester’s infamous Curry Mile, made me realise what a small world it really is.

A British girl and an Italian-Columbian girl walk into a German bar… this isn’t the beginning of an offensive joke but rather the Erasmus social experience. Where unlikely friendships are formed and you’re already assured before setting foot on foreign ground, that you’ll make friends for life. The German and Erasmus students, which I’ve met in class and on campus, have been so welcoming. A few months into my experience, I already know this to be true.Aside from friendship, the discovery of new places is one of the draws of going abroad. One of my new favourite haunts is Vary, a vinyl cafe that not only sells the best chai latte and carrot cake you will ever try, but aspires to be the epicentre of Leipzig’s music scene. The music which is played at student clubs such as Schwemme is also quite fabulous. I almost spit out my €3 Pina Colada when I realised that they were playing Newcastle-based musician Sam Fender’s hit track ‘Hypersonic Missiles’. It’s a track I fondly associate with my home student club in Manchester, 42’s. The dedication of Schwemme to providing a good night out is not to be understated, I adore how they have an anthem, which is traditionally sung when the bartender rings the bell. It must be sung before you drink your free shot while holding the glass in a particular way. It’s funny how the British night out differs. We’d usually go to British power-house pub Wetherspoons at around 8 pm and leave for the club to get there at 11:45 pm to stumble out at the closing time of 3 am. Although, the beautifully cheap alcohol in Germany certainly deserves a mention. Sipping on €1 Glühwein in my student flat with my friends before I returned home for Christmas was particularly lovely. Sampling it at Halle Christmas Markets surrounded by festive cheer and countless glowing lights was quite beautiful. Seasonal drinks are definitely something I love and the Lebkuchen Latte at Starbucks should be on your next order.

The ongoing Coronavirus situation might be preventing the full extent of the Erasmus experience, however, I’m hopeful that once it passes, I’ll have time to catch up. I plan on making the most of this once-in-a-lifetime year abroad and feeling slightly less like a British fish out of water. At the risk of sounding like a character from cliché rom-com Eat, Pray, Love – the goal is to not only discover Leipzig but to find out more about who I am while I’m away from home. I really look forward to finding out.